Do We Need More Carbon Dioxide? 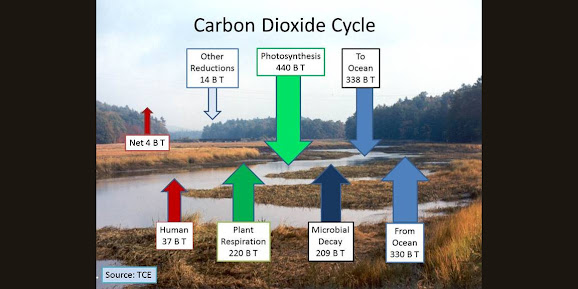 I wrote the original version of this essay on the carbon dioxide cycle in 2015. Over the years, parts have been copied and used by other authors. Although some people will challenge the precision of the data (some always do), it presents an interesting review of this important subject. If you plan to discuss or write about CO2, this essay makes an excellent starting point.

In high school and college I did reasonably well in the physical sciences: chemistry, physics and geology. From these studies one can learn that carbon (C) is an element, is widely available throughout our universe, is chemically active (which means many inorganic and organic compounds include carbon), is present in the atmosphere as carbon dioxide (CO2), is present in all natural fresh and ocean water, is a component of rocks (such as limestone), is a primary element of buried organic materials (including hydrocarbon deposits of oil, coal and natural gas), and is a very important element of the human body (about 18.5% of the elements in our body by mass). In fact, all life on this planet is based on hydrocarbon compounds which include carbon, hydrogen and oxygen.

By contrast, carbon dioxide (CO2) is a colorless, tasteless and odorless gas that occurs naturally everywhere in, on and above our planet. Carbon dioxide is not carbon, but it does include one carbon atom and two atoms of oxygen. Carbon dioxide occurs naturally in the atmosphere. Higher levels of CO2 encourage the growth of stronger and more abundant plants. All plant life (a form of organic matter) has been produced by the interaction of CO2 with energy received from the sun (photosynthesis). Oil, natural gas and coal are derived from buried organic matter which has been compressed and heated over millions of years.

If there were no CO2 in the atmosphere; humans, animals, birds, fish, trees, shrubs, grains, fruits and vegetables would not exist. We humans either eat the results of photosynthesis directly (when we consume grains, fruits and vegetables), or indirectly (when we eat animals, birds and fish that have previously consumed plant life). Green plants make their own food by photosynthesis which typically converts CO2 into a sugar:  6 CO2 (Carbon dioxide) + 6H20 (Water) + sun light energy = C6H12O6 (sugar) +6O2 (Oxygen). Other conversions include trace elements and nitrogen.

Thus it makes no sense to examine the carbon cycle (an element) when we are really interested in the carbon dioxide cycle (a gas); most specifically we want to know how CO2 is produced and consumed, as well as how much residual CO2 there is in the atmosphere. In the graph that serves as a picture for this essay, we show the primary categories of how CO2 exchanged with the atmosphere. Down arrows represent a decrease in atmospheric CO2. Up arrows represent an increase in atmospheric CO2. The size of the arrow represents the relative importance of each category. We humans contribute approximately 4.7 percent of the CO2 that escapes into the atmosphere.

According to the National Oceanic and Atmospheric Administration (NOAA) – Earth System Research Laboratory (ESRL), our planet’s atmospheric CO2 has been increasing at a rate of 1.59 Parts per Million/ per year from 1955 through 2021, or 0.000159% / year. The acceleration since 1980 has primarily been caused by the industrialization of Asian nations, most notably China.

Plants exchange carbon dioxide, oxygen, and water with the atmosphere through leaves and stems. The process of photosynthesis provides food and energy to increase the size and biological activity of every plant (the growth of leaves, stems, roots, fruits, seeds, and so on). The process of respiration in plants is the opposite of photosynthesis. Sugars produced during photosynthesis are combined with oxygen to produce the compounds and energy of plant growth. Excess CO2 is released into the atmosphere.

Microbial decay (decomposition of matter) is a process that starts soon after a plant or animal dies. Organic material is broken down into basic elements. Decomposition always includes the release of CO2.

We humans, along with other animals, begin to decay almost immediately after death. The tissues of the animal body are broken down by internal chemicals and enzymes. Bacteria invade the tissues and start the process of putrefaction. Gases, including CO2, are released by decaying animal tissue.

Although we do not have sufficient knowledge to establish all the dynamics of the CO2 gas exchange between the surface of the ocean and the surrounding atmosphere, it is estimated that slightly more CO2 is absorbed by the ocean than is released by the ocean surface into the air. It is both a physical and a chemical process that is primarily controlled by the differential between the concentrations of CO2 dissolved in the water and how much CO2 is available in the surrounding atmosphere. Since CO2 is soluble in water, we get the chemical equation CO2 + H2O = H2CO3, a weak form of carbonic acid. In the presence of free hydrogen H2CO3 + H = yields a bicarbonate ion which is stored within the waters of the ocean. The amount of CO2 which has been dissolved in the waters of the ocean varies with geographic location and the circulation patterns of the ocean currents. Higher concentrations are more likely to be found in the more populous and industrialized northern latitudes. Natural cycles in weather and ocean currents alter the rate at which the ocean soaks up and vents carbon dioxide. It is simple chemistry: carbon dioxide dissolves in water. As the earth warms, the amount of CO2 released by the oceans will increase.

The natural metabolism of the body produces CO2 as a byproduct which we (like all animals) exhale when we breath. We humans also release CO2 into the atmosphere when we raise animals, cut down trees, shrubs and grasses, burn peat and plants, consume fossil fuels, and so on. Our consumption of coal, oil and natural gas is by far the largest source of human caused CO2 because we consume large quantities of these fossil fuels by the process of combustion (burning). Gasoline, diesel, jet, and heavy fuels provide the energy that powers our transportation system, including personal vehicles. Natural gas, propane, heating oil, and kerosene heat our buildings and homes. Coal and natural gas are primary sources of the heat for the generation of electrical energy. As shown by the above table, we release about 4 billion tonnes of CO2 into the atmosphere each year; accounting for roughly 4.7 percent of all CO2 that is released into the atmosphere from all sources (both natural and human caused).

Plants consume far more CO2 through the process of photosynthesis than they release into the atmosphere through the process of respiration. These chemical reactions make plants green (usually), help them to grow stronger, and increase the rate of growth. For plants, more CO2 is better and there is evidence that elevated levels of CO2 in the atmosphere have increased the greening of our planet. At least 35 percent of available man-made C02 is consumed by plant life on our planet.

Since CO2 is soluble in water, damp or wet soils will take up CO2 where its chemical components may combine with other chemicals in the soil to produce other compounds.

The ocean – along with lakes and rivers – currently removes more CO2 than the waters of our planet release into the atmosphere.  The ocean reduces carbon dioxide through the CO2 gas exchange between the surface of the ocean and the surrounding atmosphere, and through photosynthesis by plant-like organisms (phytoplankton) that live in the ocean. Moss, algae, and other plant forms that live in bays and estuaries also remove CO2 by photosynthesis.

Human caused CO2 is ~ 4.7 % of total global CO2 emissions (and increasing). Although the primary reason is the combustion of fossil fuels for domestic use, this figure also includes both combustion and non-combustion industrial processes (manufacture of plastics, fertilizers, paints, cement, asphalt, cosmetics, etc.), agricultural land use changes, deforestation and logging, as well as CO2 from forest and peat fires.

The Annual Net Increase of global atmospheric CO2 is ~ 0.000159% / year in parts per million. This percentage is the average annual mean of increased atmospheric carbon dioxide observed by NOAA ESRL at the Mauna Loa Observatory in Hawaii over the last 66 years.