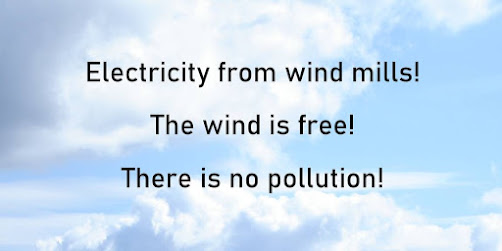 Author’s Note: Every positive technology innovation evokes the promise of potential benefits. Supporters proclaim we have launched an exciting new opportunity. But mature minds will recognize every technology solution brings with it unknown risks and uncertain costs. Although wind turbines (windmills with electric generators) have stimulated a lot of interest and excitement, this is an evolving technology. We do not know if the potential advantages are sufficient to overcome the associated risk and cost challenges. Let us not forget, the objective of any electric power generation system is to provide reliable and cheap electricity.

More than 300,000 large, three-blade, horizontal-axis wind turbines have been installed. These large units begin to generate electricity if the wind is passing over the blades at a sustained speed of more than ~ 9 miles an hour. A continuous wind speed between 30 and 50 miles per hour is required for optimal operation. The faster the wind is blowing, the greater the output of power. However, most turbines automatically shut down when wind speeds exceed ~ 55 miles per hour to prevent mechanical damage to the turbine and tower.

A wind turbines capacity and efficiency factors can be used to compute its estimated annual output. Assuming the wind blows 24 hours a day all year long, the formula is: 365 days per year × 24 hours per day × maximum capacity × capacity factor = kilowatt hours per year. For example, a turbine with a rated capacity of 1.5 megawatts and efficiency factor of 25 percent would be expected to produce as follows: 365×24×1500×0.25=3,285,000 kilowatt hours per year.

Three megawatt industrial size wind turbines have an efficiency factor of 30 to 50 percent of rated power output. But given real world operating conditions, such as intermittent wind conditions, annual electric output is often less than 30 percent of rated power output. They do not generate electricity if they are shut down for maintenance. They do not work well (or at all) when subjected to snow or freezing rain. Below a wind speed of around 30 mph, wind turbines produce far less electricity than they do at 45 MPH.

And finally: during episodes of higher than optimum winds, the rotation of the blades must be stopped. This is accomplished by a braking mechanism. They occasionally fail. The resulting friction incinerates the turbine and it housing, or if it fails to engage the torque of the whirling blades can cause sufficient stress on the tower to cause it to collapse. Fortunately, these accidents – although spectacular - are rare.

So… a 50 gigawatt wind farm turbine may only produce 15 gigawatts of useful power a year. But we still have not examined the really important problem of wind turbine operation. The power generated by a wind turbine seldom matches our need for electricity.

We Americans have a daily routine. We get up in the morning, prepare for the day, go about our activities for the day, return home, eat, spend some leisure time doing whatever, and then retire for the night. In order to support our activities we have used electricity for refrigeration, cooking, hot water, heat, air conditioning, cleaning, lights, tools, entertainment, and whatever else fills out our day. Electric tools, communication devices, and vehicles have to be recharged. With minor changes on weekends, this is our pattern of electric consumption… day after day.

In the following chart the black line shows the total integrated load that consumers placed of the electrical system from June 8 through June 15. Notice that the pattern of electric consumption (left axis) follows a reasonably predictable pattern… day after day. By contrast the availability pattern of wind turbine electric power (right axis) never matches the pattern of consumer demand. Even when the wind does blow hard enough to turn those turbine blades – the power available for the grid is useful only when the demand for electricity is declining. It is certainly inadequate in four of the eight days. 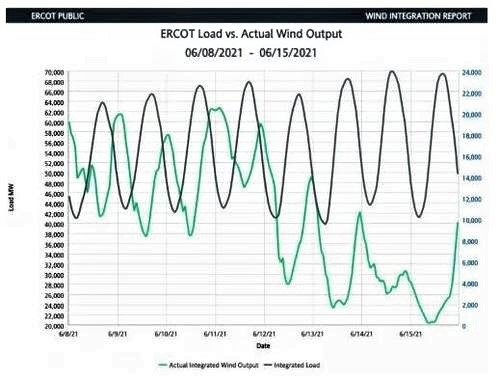 That defines the key problem with wind power turbines… while demand follows a routine that can be scheduled; the supply of wind power is sporadic. Any public electric utility that tries to integrate wind generated power with nuclear, fossil fuel, solar and other sources of electric power faces a monumental (uncertain and expensive) grid management problem. Dispatchers can only be expected to make an educated guess about the availability of wind turbine electric power. That has to affect system stability (blackouts or temporary loss of voltage).

Can we use wind turbines to charge batteries? It would seem the sporadic nature of wind generated electric power could be solved if the turbines were used to charge huge batteries, and then consumer demand could be met by discharging the batteries into the electric grid as needed. But the battery solution overlooks the costs and operational characteristics of a windmill to battery system. There is a loss of electric power during the charging and discharging cycle, repeatedly charging and discharging a battery gradually reduces available power, and battery capacity also declines with age. Recycling or disposal of old batteries (and their chemical components) is a pollution challenge. Large utility scale battery installations using Li-ion batteries are potential hazards. As demonstrated by an April 2019 fire and explosion in Arizona, there is a risk of fire and explosion where Li-ion batteries have been used in utility scale power storage systems. If a single cell overheats, the result can be a “thermal runaway” that propagates to adjoining cells. As several spectacular Tesla battery “fires” have shown, the resulting blaze is virtually uncontrollable. There will also be a release of gases including Hydrogen Fluoride (HF), Hydrogen (H2), Methane (CH4), Ethylene (C2H4) and Carbon Monoxide (CO). And in the end, the amount of available power is still tied to the capricious nature of wind flows. We cannot assume there will always be enough wind to keep the batteries fully (or even partially) charged.

Wind turbine blades in the existing US fleet are, on average, about 164 feet long (approximately the width of a U.S. football field). The blades are expected to last 25 years. About 75 – 85 percent of the several thousand turbine parts - steel, copper wire, electronics, and gearing—can be recycled or reused. But currently the fiberglass and plastic blades cannot. Wind farm operators are therefore challenged to find enough landfill space to bury more than 900,000 very large blades.

Wind turbines appear to be a good source of electric energy. Wind power is free. Operation requires no fossil fuel. Operators know how to manage the expensive maintenance challenges. We just have to be willing to endure occasional blackouts and unstable electrical system operation, ignore the noise and visual pollution, accept the death of thousands of birds, be willing to find enough land fill space to bury  worn out wind turbine and turbine blade junk, and manage the disposal of battery system chemicals and components.

By the way: I am actually a fan of windmills. They have been used for centuries to pump water and grind grain. In these applications the functional intermittency of operation is not much of a drawback. But the use of wind turbines to generate reliable electric power requires we find technology solutions that are likely to increase the cost of delivered electric power. We have to remember. Our first world lifestyle depends on the continuing availability of cheap energy.  Do not make the mistake of underestimating the importance of this one word  - “cheap”.

Going forward, economics and practical considerations – not idealism – will determine the outcome.

Errata: Perhaps we should be looking to develop smaller wind turbines for farm a rural residential systems. My son has designed a 48 volt wind powered generator system with adequate battery storage capacity to run a small microwave, a small refrigerator, a hot plate, his PC, and some lights.

But not all of them at the same time.

PS: In an essay with this much information some of the facts can, and should be, challenged. Do so if you wish. But no smart unproductive remarks: if you want to make an intelligent contribution - show us your data.